You are here: Home / Discord / Your Bizarre Adventure Discord Server 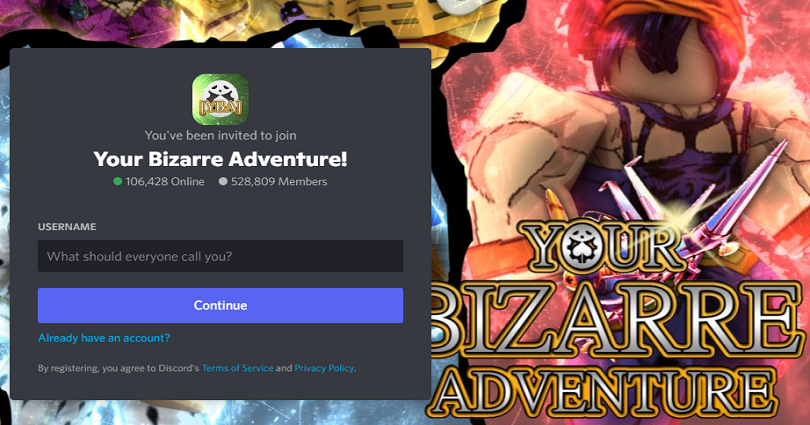 Welcome to Your Bizarre Adventure, an MMO RPG game about getting powerful abilities called “STANDS”,

You can also battle with gangs, fight in PvP, and so on.

You can go to their social media sites to get codes, updates, announcements, and more help.

They have launched a new update that has a sword-style rework, stand skin rarities, new maps, and new code.

Apart from that, there are more changes, additions, and balances for you to experience in-game.

This post has the Your Bizarre Adventure Discord server link for Roblox, game link, and server rules.

The official Your Bizarre Adventure Discord server link is https://discord.com/invite/yba.

It has multiple channels including #updates, #giveaways, #game-nights, and more.

To get access, you must agree to the rule and it can be done by scrolling up and reacting to the “Verification” message.

After verifying yourself, you can do chat on many discussion channels.

Just keep in mind that the notification setting for the server is set to “All Messages”.

To restrict spam, the setting can be changed to “Only @Mentions”.

The announcement channel has information about shutdowns and fixes.

The most active channel is the #general channel which is used by everyone for chat purposes.

What is the game link for Your Bizarre Adventure?

A Roblox account is needed to play Your Bizarre Adventure.

If you don’t have an existing Roblox account, you can create one from this URL: https://www.roblox.com/.

After the creation of an account, you can search for “Your Bizarre Adventure” in Experiences or go directly to the link above to play the game.

You will be banned permanently from Discord as a punishment.

In this case, punishment differs from a mute to a Discord ban.

If violate this, the punishment can be an in-game and Discord permanent ban with no appeal.

If it is done on the server, you will be penalized with a mute, and a Discord ban if done in DMs.

Punishment will be given keeping in view the severity, ranging from a mute to a Discord server ban.

Punishment is a Discord server ban.

The penalty is mute in most channels but varies depending on the importance of the channel.

The penalty is a Discord server ban.

The penalty is mute.

In this case, the punishment varies from a mute to a Discord ban.

You will be permanently banned automatically with no appeal.

Punishment is different for every user and it depends on severity. Varies from a mute to a Discord ban.

The penalty is an in-game and Discord permanent ban.

The penalty is an in-game and Discord permanent ban.

Punishment is a Discord ban.

You may be banned or muted on Discord.

You will get the same punishment as if you broke the rule you were talking about.

It will cause an in-game and Discord ban.

Punishment varies and it can be from a mute to a discord ban depending on severity.

The penalty will result in a permanent ban in-game and on Discord.