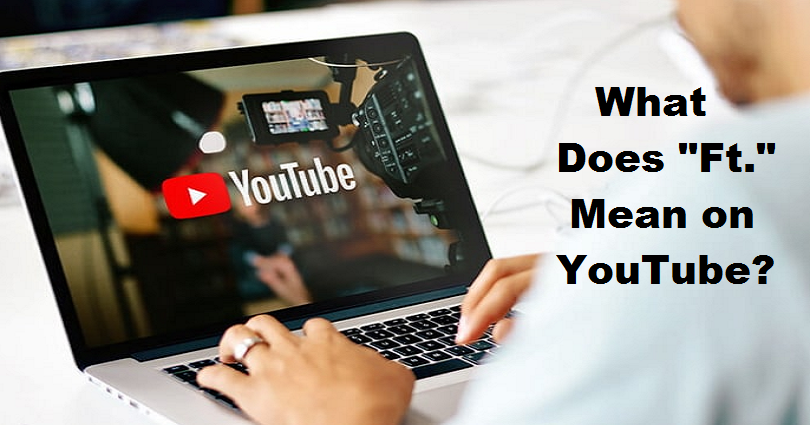 You may have seen this abbreviation in the title of a music video.

Or you might have seen it in the title of a song.

The meaning of ft on YouTube is the same for both video titles.

However, it can cause confusion because abbreviations can describe different things.

For instance, “ft.” without the dot is an entirely different abbreviation.

You need to see the context of the sentence to understand the meaning of the abbreviation.

Further, you will also be able to know why it is used, how to use it and so on.

The abbreviation ft stands for featuring on YouTube platform.

Usually, it is used in the title of the music videos published on YouTube when an artist collaborates with another artist in a song.

For instance, a music video “Love the Way You Lie’ is recorded by Eminem featuring Rihanna.

Therefore, the title of the video is “Eminem – Love The Way You Lie ft. Rihanna”.

The main artist comes first in the title of the music video and the name that comes after “ft.” is the invited artist.

Do not mix “ft.” with “ft” as both of them are different abbreviations.

The “ft” abbreviation stands for foot or feet (without the dot), that is a unit for measurements.

Alternatively, with the dot (ft.) shows featuring, that is used in music videos.

Since YouTube is a platform where music videos are available in bulk that is why you will see “ft.” more often as compared with “ft”, until someone is trying to show measurements of something.

If you are collaborating with someone then you can use “ft” in the title of your YouTube video.

Although the music videos use “ft.” in the title of the video if you are collaborating with someone, you can use it too.

For instance, if you want to upload a video of a travel vlog with your friend, you can make the title like “Travel vlog ft. + (the name of your friend).

The same is the case, if you are doing a prank video with another prankster, you can make the title as “Prank ft. + (the name of the YouTuber).

It is an ideal way to give credit to another person who is making the video with you.

The term “ft.” is not limited for music videos.

The term can be used in the title if you are doing any sort of collaboration in the video.

If you have added the person in most parts of your video, you can add “ft.” to give recognition to their work.

They might get offended if you do not give them credits.

It is the best way to give credits to anyone in your video.

Further, you can also add their social media profiles in the description of the video to make them easily accessible for the viewers.

It is very decent to give credits to anyone who collaborates with you on YouTube.

Why do we use ft. in Videos?

So the question arises, why do people use “ft” in their videos?

The purpose of using “ft” on video is to give credits to the person making the video content with you.

It is a common decency to give credit to someone who collaborates with you on a YouTube video.

This is one way to give credit to someone by adding “ft.” with their name for collaboration purpose.

The best way to credit anyone on your video is to add “ft” in the title of your video.

For instance, if a YouTuber name Arsalan is collaborating with you on a video, then you should add “ft. Arsalan” to the title of your video.

It will tell people about the person performing in your video.

Otherwise, the subscribers or viewers might get confused because they might not be familiar with the person in your video.

However, if the person is performing in your video for a short period, there is no need to add “ft” in the title of the video.

If anyone is coming in your video for a short time, it is called a cameo.

Therefore, you do not have to add “ft” in the title of the video until the person is performing for the most part of the video.

What does ft. mean before a name?

If the “ft” appears before the name, this abbreviation stands for featuring.

When you or anyone collaborates with another person in a video, the usage of “ft” shows the credit to the person.

Let’s say Arsalan (the main artist) is collaborating with Rauf (another artist) in a music video.

The video will be titled, “Arsalan ft. Rauf”.

Alternatively, if the main artist is Rauf, and Arsalan is another artist, the title of the video will be, “Rauf ft, Arsalan.

As long as there is a collaboration in the video, “ft.” can be used to give credits to another person in the title.

If there is a single person in the video, the “ft” abbreviation cannot be used.

What is the full form of feat.?

Same is the case with the abbreviation of “ft”.

In short words, “ft” is the shorter abbreviation of “feat”.

It is very common in the titles of music videos in order to make the video titles shorter.

It means that both abbreviations “ft” and “feat” can be exchanged.

The difference is “ft” is a shorter version and “feat” is the longer version.

There are some points to consider when it comes to selecting between “ft” and “feat” for the title of your video.

First of all, the “ft.” abbreviation is shorter than “feat.”.

If your video title is already long then you should consider using “ft” (the shorter version).

Alternatively, if the title of your video is short, I recommend you use the longer version that is, “feat”.

“Ft” is the short version as compared with “feat”, that is why people may know about it.

Is feat. short for feature?

The answer is no, it is not.

“Feat” is a short version of featuring not feature.

This abbreviation is usually used in the video title of music video when an artist collaborates with another.

Feat without the dot is a noun in English language.

So if you come across a word “feat” that does not have a dot at the end, it does not stand for featuring.

It is because it is a noun in English instead.

Alternatively, if the abbreviation “feat.” is present in the music video title, it stands for featuring (for example feat. Eminem).

Do you want to use ft in the title of your YouTube music video or in a sentence?

Here are some examples so you can use “ft.” in a sentence:

Further, it is also discussed how to use “ft”, when to use it and why it is used etc.

To give a bird’s eye view, “ft.” is not only used for music videos.

“ft.” can also be used for all types of videos, as long as it includes someone else in the video.

Furthermore, “ft.” and “feat.” can be exchanged for one another.

The usage of the abbreviation depends on the circumstance.

For example, it is better to use “ft.” instead of “feat.” Where videos have longer titles.

On the other hand, if the title is short, you can opt for “feat” instead of the short version that is “ft”.

It is not necessary because both abbreviations can be used interchangeably.