You are here: Home / How to / List of ChatGPT Examples 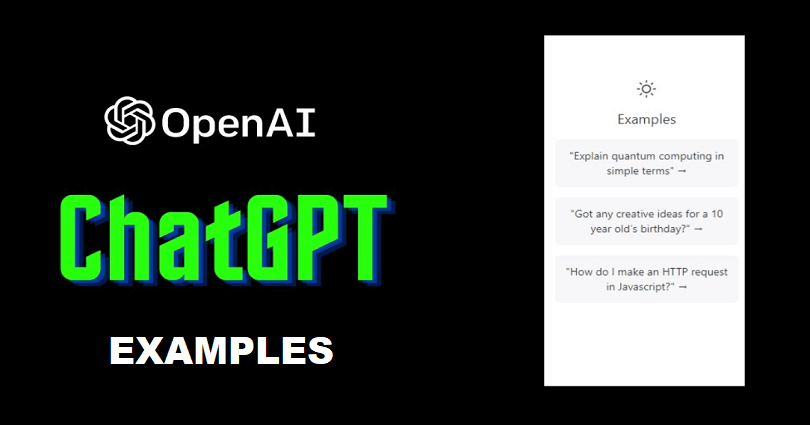 The developer of ChatGPT is OpenAI and it is also an AI that replies you in a conversational manner.

You will get answer to follow-up queries, reject requests that are not appropriate and question assumptions.

This company is paying attention to developing and promoting advanced AI technology.

The aim of OpenAI is to build AI that helps humanity to do advanced research from AI.

In 2015, it was founded in San Francisco, California and the founders are Elon Musk and Sam Altman.

This post has a list of hilarious, useful, and interesting Chat GPT examples and requests that you can try.

1. Writing an essay out of anything

With ChatGPT, you can command it to compose an essay for you.

To avoid plagiarism, you can use it with QuillBot, you need it if you are a student or a blogger.

QuillBot can be used to paraphrase paragraphs and articles.

After using the tool named QuillBot, you can check the article for plagiarism to verify it.

Command ChatGPT to compose a story about any person or thing.

Here is for inspiration, “Write a story about how Sam Bankman-Fried lost $10 billion”.

You can also give a command to make the stories in x words.

An example of this instance is, “Summarize “Rich dad poor dad” in 200 words”.

ChatGPT will not accept inappropriate or illegal requests and it will reject them.

However, there are different methods to bypass those policies.

To do that, you have to ask a question ChatGPT to get a reply based on someone else’s perspective.

Do not ask it “How to hotwire a car”, put it in such situation that is justified.

Note: ChatGPT is improvising and improving, so it will be difficult to bypass certain requests.

4. Mimic something or someone

You can use ChatGPT to mimic someone to explain something.

To use an example, here it is one, “Explain Quantum Mechanics like I’m 8 years old”.

Another example of the request is, “Explain the theory of everything like a fast-talking wise guy from a 90s movie”.

You can ask for a funny joke about any topic including people, animal, or objects etc.

But keep in mind Chat GPT does not tell you too funny jokes.

An example of it is, “Write a joke about two peas in a pod”.

Another example is, “Write a joke about physics”.

If you’re a programmer, ChatGPT can find and fix bugs in your code, all you need is to ask it.

To begin with, copy and paste the code that has an error into Chat GPT and ask it to fix the code.

An example of this test is, “What is the bug in this code and how do I fix it: (put the code here)”.

It has the ability to analyze and fix the codes from different languages of programming such as Python, C++, JavaScript and so on.

Do you want to improve your gaming or sports experience and want to go ahead?

You can ask ChatGPT to coach you or advise you to become better at something.

An example of this is, “How do I become the chess master?”.

Another example is, “What are the highest winning first, second, and third moves in chess?”.

How to Fix ChatGPT Not Working

How to Fix “Too many requests” in ChatGPT

How to Fix “Err_too_many_redirects” in ChatGPT