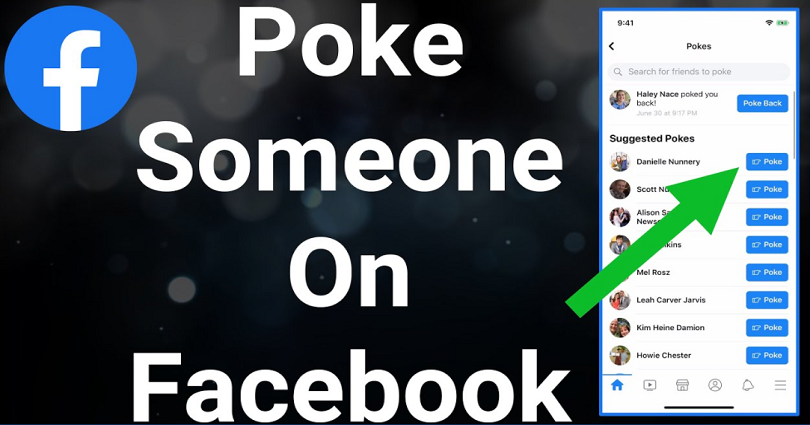 If you are curious to know whether poking is still a feature on Facebook, you are at the right place.

Poking used to be a really cool thing that is added by Facebook in the early days.

People tend to use it to nudge their friends and family.

For instance, if someone is not coming on Facebook for a while, you can use this feature to poke them.

The user will be notified through a notification by email whenever you poke a user on Facebook.

In this post, I am going to teach you how to poke someone on Facebook with mobile app.

You will also come to know what is poking and whether it is flirting or not.

Poking is a unique feature developed by Facebook to enable you to send a “Poke” notification to users.

If you have not talked to your class mate for a while, you can always poke them to break the ice.

The feature can be used in different ways on the platform.

It can be used to greet someone on FB.

Further, you can poke anyone to see whether the user will poke you back or not.

If they poke back, you can use the feature in future to poke them again.

However, the feature can be used again if the person pokes you back first.

If you want to avoid poking, you can ignore the user or in worse case, you can block them too.

Reach the shortcut of “pokes” and tap on it to poke someone.

When you poke someone, the user will be notified that you have poked them.

The feature is still available.

However, it is not visible so you have to search for it because it is hidden on Facebook.

When you navigate to the pokes page, you will see the list of your Facebook friends that have already poked you.

Furthermore, you can also see a list of suggested pokes too.

I have written a step by step guide on how to poke someone on Facebook.

1. Tap on the search icon

Open Facebook app> tap the search icon available on the top right side.

First of all, open the Facebook app on your android device.

The desktop version can also be used on PC to visit the pokes page.

However, we have taken the screenshots from an android device, so the user interface may be different from the desktop version.

The first step is to open Facebook app and navigate to any page.

The search icon will be visible on the top navigation bar.

You need to search for pokes page to find it.

It is because the feature is hidden from the menu of Facebook.

The search feature will enable you to search for people, posts, shortcuts, and so on.

The poke feature is characterized as “Facebook shortcuts”, so you can use the search feature to find it.

Move on to the next step to know how to navigate to the poke function on Facebook.

Use search icon> search for “Poke”> tap on “Pokes” under “Facebook shortcuts”.

The search bar will also display your recent searches as well.

On the search bar, type “Pokes” to search.

After typing the term, tap on “Search” to search the poke feature.

Under the header, you will come across a shortcut named “Pokes”.

This is the shortcut you need to start using the function.

To go to the poke function, tap on “Pokes”.

Proceed to the next and final step to learn how to poke your friends on Facebook in 2023.

After tapping on the “Pokes” feature, you will be redirected to pokes page.

Further, it will also display the list of friends who have poked you on Facebook under “Pokes”.

In addition, you will also see a list of friends under “Suggested Pokes” to poke them.

Tap on the “Poke” button next to their name if you want to poke someone.

The poke notification will be sent to them using app or email after you have poked them.

Then, it is their choice whether they reciprocate the poke or ignore the poke.

If they poked you back, then you can also poke them again.

However, if your friend ignored the poke, you will not be able to poke them for the next time.

You can poke any of your friends who have poked you listed under the “Pokes header.

Tapping the “Poke Back” button will do the job.

The “Poke Back” button will notify your friends with a notification that you have poked them back similar to the “Poke” button.

You have successfully learned how to poke someone on Facebook in mobile app or on PC.

The function can be used to greet someone or to break the ice or a friendly nudge.

For instance, if someone is disappeared from Facebook for a long time, you can poke them to get them back to the app.

You can also use the feature to say hello in a non-intrusive way.

It all depends on the intention behind every poke.

Poking on Facebook has been defamed in the past years.

Some users consider this feature creepy because they might get poked by users whom they do not know.

Other users find it unnecessary because it is just poking nothing else.

Poking can also cause confusion because you may not know what the person feels or thinks about you when they poke you.

Is it a greeting or something more than a greeting?

It depends on the receivers thinking to determine the cause of poking.