You are here: Home / Gaming / How to Get Moonpiercer in Genshin Impact 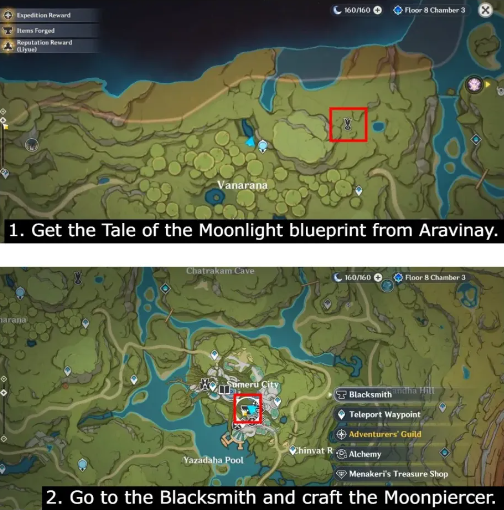 You need to get a blueprint in Genshin impact that is the Moonpiercer Sumeru Polearm Craft Blueprint.

However, a lot of players have no idea where to get the blueprint/weapon.

In this post, I will guide you on how to get Moonpiercer Sumeru Polearm Craft Blueprint or the Moonpiercer in Genshin Impact.

How to Get Moonpiercer in Genshin Impact

You have to finish the Aranyaka Part 2 World Quest in order to get the new craftable weapons in Genshin Impact such as the Moonpiercer.

In addition, you also have to unlock the area where the Aranara sells craftable weapons.

The currency that you can use to buy the Moonpiercer Sumeru Polearm Craft Blueprint is 1x Stories of You and the Aranara.

The Aranara who sells the craftable weapon is available in Vanarana (Tree of Dreams).

To get to it, you can teleport to the statue of seven in Vanarana.

Go to the Tree of Dreams and talk to Aravinay to purchase the Moonpiercer blueprint.

In the end, go to the blacksmith in Sumeru City and craft the Moonpiercer.