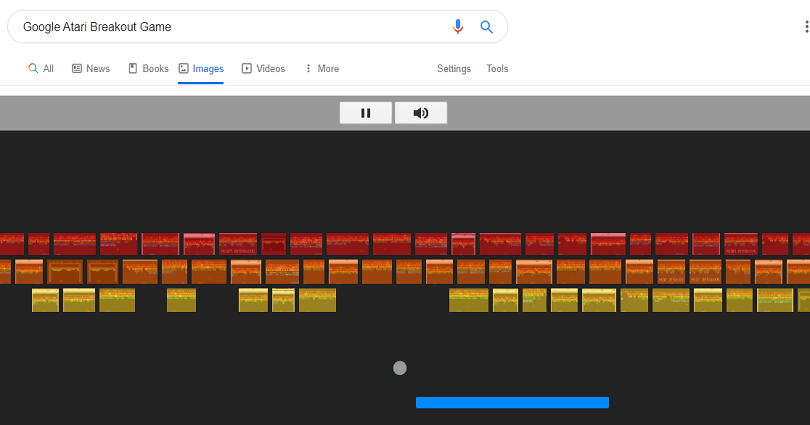 In this epoch, Google is the most popular search engine and the founder of Google are Larry Page and Sergey Brin who founded it in 1998.

The search engine is famous for containing a myriad of easter eggs.

It is replete with hidden messages, inside jokes, secret games, and more.

If you are a regular user of Google and also a fan, you might have faced one.

However, it is not a child’s play to find easter eggs because they won’t be included to popular searches.

Having said that, a famous easter egg is the “Atari Breakout” easter egg on Google Images.

In this article, I will tell you how to play the Atari Breakout game on Google, what is it, and whether the Easter egg is removed.

What is Atari Breakout on Google?

You will see it when you or anyone else search for “Atari Breakout” on Google Images.

While performing the search, it will shrink the images and make them into blocks.

You have to move your mouse to play the game and the mouse will control the paddle.

The main task of the game is to keep the ball bouncing on the paddle until it destroys all the blocks there.

In 2013, the Atari breakout was introduced as an Easter egg on Google

They launch it to celebrate the 37th anniversary of Atari Breakout.

When a user does a search for “Atari Breakout”, the images will turn into blocks and you can play the classic game.

However, after the anniversary of the game, Google removed it.

Having said that, it can also be played on different websites.

Why is Atari Breakout not working on Google?

Atari Breakout is not working on Google because it was deleted.

The purpose of releasing it was to celebrate Atari Breakout’s 37th anniversary.

After the game’s anniversary, Google removed it from the images.

However, you can use the trick in this article to unblock Atari breakout.

How to play “Atari Breakout” on Google

Here are the steps to play “Atari Breakout” on Google:

To play Atari Breakout on Google, the first step is to go to Google, search for “Atari Breakout” and click on the “I’m Feeling Lucky” button.

After clicking on it, this trick will allow you to play the game.

Another way to play it is to use this link: https://elgoog.im/breakout/ to play the game.

The images will become blocks when you reach there, and you can play it.

The controller in the game is mouse, move your mouse back and forth to control the paddle and remove all the blocks.

Google had removed this Easter egg Atari breakout from it, but this tip will help you to play it.